Angela Ford’s PROVOKED is FREE! September 1st-5th 2016
https://www.amazon.com/Provoked-Angela-Ford-ebook/dp/B01E4YIAQS/
Her husband’s actions provoked her but his death haunts her...


Secrets, lies and hidden agendas bring Detective Riley Briggs closer to the truth. What   scares him more is that he’s fallen in love with a woman who got away with murder.

What are readers saying about Provoked...
“As a fan of Angela Ford’s work, this is one of her best, most suspenseful and ingenious stories. The cast of characters offers a taste from sweet to evil, gullible to controlling, with passion and sexy to cruel and devious. The dialog takes the reader on this roller coaster journey with an unexpected surprise at the end. Keep your friends close and your enemies even closer!” - Amazon Reviewer -
“Angela Ford weaves a tight story of intrigue and murder in the novel Provoked. Basia is a woman provoked by the man she thought loved her to do the unthinkable.”- Amazon Reviewer -

Excerpt from Provoked...
Basia reached for the vial she’d slipped in her pocket once the coffee brewed. Her trembling hand released the poison into his thermos and secured the lid. She placed the empty vial back in her pocket. Basia planned to discard it along their hike on Eagle’s Path. He’d forced her hand to his demise. Darek left her no choice. She knew her actions were wrong but his actions had provoked her. She reassured herself there’d be no possibility the thallium would be found in his blood. If his body was found, they’ll report his death as a hiking accident. His fall from the cliff will be noted as his cause of death. I’m just helping his fall. Basia looked out the window at the beautiful scenery she hoped would ease her nerves.
“Moja kochana, are you ready to hit the trails?”
His voice startled her from her thoughts. She didn’t turn to face him. She couldn’t. The scent of his cologne hit her, and then she felt his coarse hands lift her shirt and slide around to her belly. I’m not your love.

In the beginning she’d craved his touch. Now it sickened her. He leaned in closer and blew his hot breath on the nape of her neck. His throaty moan cried out arousal. The sudden hard grind of his groin against her backside confirmed it. She worried she’d have to make love to him one more time before she killed him.

Best of all...it’s FREE! September 1st to 5th, 2016
https://www.amazon.com/Provoked-Angela-Ford-ebook/dp/B01E4YIAQS/
Hope you’ve had an amazing SUMMER...I hope to help you FALL in love with more reading! Ange
Escape with a Book by Angela Ford
Romantic Escapes : http://www.angelafordauthor.com 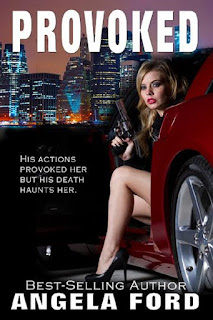