First there was Closure. Then it was Forbidden. Now the unsub is Obsessed. 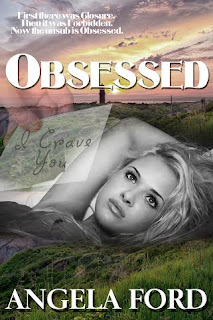 The FBI cyber-crime series continues after Jess shoots Trevor Marshall in her kitchen. The man responsible for three murdered teens in the Bay area, her parents and her adopted daughter’s parents. Ten years before he stalked her without her knowledge. Her father kept it from her to protect her and sent her to the west coast for college. Marshall murdered her parents in his attempt to find her. Ten years later he’s successful but Jess is a compelled FBI profiler who hunts internet predators.

SSA Jessica Resario thought her life had settled; now there’s more at stake. She stepped down as the team’s leader to be with her family and SA Mike Turner is promoted. A postcard shows up on her doorstep with the same three words used by Marshall - I Crave You. Mike promises to discover how it was leaked from the sealed case. When another postcard turns up at Jess’s beach house, Mike takes the team to the east coast. Only half the team makes it to the beach house. Old ghosts, secrets and with more at stake; Jess is determined to end this obsession and protect her family.

Excerpt for Obsessed:
Jess looked in that direction and something caught her attention. She tip-toed toward the door and discovered a postcard on the floor just inside the front door. Memories of the postcards crossed her mind as she bent down to pick it up. Her hand trembled as she read her name on the front of the post card. She turned it over slowly. A tear formed and hit her cheek as she read the words written on it. I Crave You.
The sudden jolt of shock that hit her at the front door led her to scream Tom’s name. The postcard fell from her hand. Tom came running from the bedroom. Jess’s scream woke everyone and they all met at the front door. Jess couldn’t speak but pointed to the welcome mat where the postcard lay. Those three words “I Crave You” could be read as plain as day. Tom reached for the postcard with horror; one of Vineyard Haven addressed to Jess with those three words just like the ones she’d received in the past.

Romantic Suspense – FBI gripping series – FBI profiler Agent Jessica Resario is compelled to save the fourth victim from a sexual predator; only to put her own life into the hands of a serial killer.
Angela Ford’s dedication to volunteer and involvement with cyber safety seminars gave her an Award of Distinction and sparked the idea for her first book Closure – suspense with a dash of romance that hit the best-selling Action/Adventure.
Closure & Forbidden are permanently reduced to 99 Cents!
Bestselling Action & Adventure-Angela Ford
Gripping FBI Crime Fiction grounded by an as-yet-unrealized love story…
http://getbook.at/AmazonClosureAngelaFord
http://getbook.at/Amazon-Forbidden 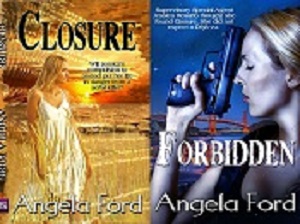 My cyber-crime series is about an FBI team of profilers that work endlessly to keep teens safe from online predators. I created a special FBI task force called the ISTF (Internet Security Task Force). My main character, Agent Jessica Resario, is compelled to protect teenagers from those who prey on your children. Jess doesn’t always follow protocol, which only puts her in the hands of a serial killer…and usually a suspension.

In Closure Jess escapes the danger of a serial killer and retreats to her family beach home in Vineyard Haven; where her parents were murdered ten years before. Only to discover old ghosts, secrets from the past, and postcards marked “I Crave You”. As if she didn’t have enough to deal with, she opens the door to a man she believed to be dead. Now she is on the hunt for a serial killer while she unravels a secret of her past. Orphaned as a teenager, she has protected her heart to love again in fear of losing. Yet, an undeniable attraction to her team lead, Tom, and a close call with death leaves her open to the possibility to love again.

Forbidden, the sequel to Closure continues with spine-chilling seminars to educate parents of lurking internet predators. A seminar one night introduces Supervisory Special Agent Jessica Resario to Mr. & Mrs. Bennett who are deeply concerned of their daughter Tiffany’s safety. Kyle Davidson’s personality fits a stalker through obsessive and addictive traits. Jess leads the team to protect Tiffany and unravels the forbidding prospect that the past has come back to haunt her.  A close call one night makes Tiffany realize Kyle is a threat and when Tiffany’s parents are murdered, Jess takes the law into her own hands only to

Closure by Angela Ford
A gripping FBI search grounded by an as-yet-unrealized love story…
Closure is the story of Jess, a young FBI profiler working tirelessly to track sexual predators. When a close encounter with her target leaves her exposed she goes into hiding, forcing her to confront some deep secrets from her own past.
http://www.amazon.com/Closure-Angela-Ford-ebook/dp/B00E905NLS/

An elite FBI task force tracks online predators while they hunt their prey. A series of murders in Presario Heights has forced Special Agent Jessica Resario to follow her gut instinct to save the next victim. Supervisory Special Agent Tom Erickson removes her from the case. The only place to escape the danger is her family beach home. She hadn’t been there since her parents were murdered. The level of intensity climbs higher with her discovery of postcards marked “I Crave You”. Old ghosts, secrets, imminent threats and an inevitable attraction to Tom send her on an emotional roller coaster. If that wasn’t enough, she opens the door to a man she thought was dead. Tom is stabbed and his case files go missing…high emotions put Jess at the killer’s mercy.
Suddenly reality hit her. She let no one in. Brave at work, yet in her personal life, she didn’t have the courage to confess her true feelings to Tom. The murder of her parents ten years before kept her from loving, for fear of losing again. All she had was her work, and her work put her life into the hands of a serial killer. Closure on YouTube
Excerpt from Closure :
Jess opened the file that held copies of the postcards. They were simple postcards of scenic views which could be found in any shop in the Vineyard. The backs of the postcards showed Jess’s name printed very neatly, and beside it was written, “I Crave You.” All three cards had the same quote, her name, no address and no postage stamp. They would have been placed under the door in person.
A cold chill ran up her spine. It was definitely not a prank from one of her friends; they had more class than that! She couldn’t recall anyone around her who was shy or might have a crush on her. Sandy and Billy, her closest summer friends, would definitely have told her if someone had a crush on her. She never even dated anyone from the village in the summers. It was a small village and everyone around her age had gone steady since they were about ten years old.
There was a boy she had dated in Washington her senior year, but it was never serious. They only dated for a few months before graduation and Jess ended it before she left for the beach home. He wanted to continue their relationship, but she was headed west and he was attending college in the east.
The three words, “I Crave You,” struck a nerve. Where had she heard those words? Jess couldn’t recollect if the words were used in the existing case, or if they were from her past.

Supervisory Special Agent Jessica Resario thought she found Closure. She did not expect a Déjà vu.

Jessica Resario thought she found closure from the arrest of her parents’ murderer. She allowed her heart to love again. Knowing a married couple could not work on the same team, Tom Erickson stepped down as Supervisor of the FBI’s Internet Security Task Force. He decided to go back to the FBI Training Academy and groom new agents. Jess was promoted to direct the team.
Supervisory Special Agent Jessica Resario continues to deliver spine-chilling seminars to educate parents and teenagers of lurking internet predators. A seminar one night introduces her to Mr. & Mrs. Bennett who are deeply concerned of their daughter’s safety. They know of Jess’s arrest the year before of Trevor Marshall. They asked Jess if she would take the time to read what they had discovered. Jess takes the file home. She did not expect to feel Déjà vu.
Jess leads the team on the case to protect Tiffany. The team unravels the forbidding prospect that they have another Trevor Marshall on their hands. His personality fits a stalker through obsessive or addictive traits.  Kyle had one exclusive relationship for years, his wife Tara. Tara died in a car crash on the I-80 earlier in the year. From what the team discovered of Tara Davidson, she fit the profile of domestic abuse. The chilling factor that hits the team is the striking resemblance between Tara Davidson and Tiffany Bennett.
A close call one night with Kyle Davidson makes Tiffany realize he is a threat to her. As usual, Jess took the law into her own hands to protect the girl and entered Kyle’s house illegally. They can’t hold Kyle without Tiffany pressing charges. Jess is suspended again for her actions and decides a trip to the beach house with her husband is the best medicine. Tiffany decides to accept her father’s offer to send her to private school in England. The news of her parents’ murders brings Tiffany home. Jess races back to save her, only to put her own life into the hands of a killer. The team is in search of Jess, Tiffany and the killer. To their surprise, the past begins to creep up on them.

Startled from her thoughts, Jess turned and saw Tom in the doorway with a concerned look on his face. He walked closer to her and set a cup of tea on her desk.
“I thought you might need this.”
“Thanks Tom. You always know what I need. I love you so much.” She smiled and reached for his hand. Just his presence in the room warmed her from the cold chill she’d felt.
“I love you too.” He leaned down and kissed the top of her head. “Now spill it Jess. I know that look.”
She laughed at his remark. He knows me so well.
“I feel like I’m reading about Trevor stalking me. This girl is in trouble, Tom. She’s being stalked. I feel it in my gut.” Jess took a sip of her tea. The warmth and sweetness of that Earl Grey Cream was exactly what she needed to calm her.
“That look worries the heck out of me. But I learned a long time ago I can’t stop you.” Tom picked up her phone from the desk and handed it to her. “Call Mr. Bennett”
“At this time of the night?” Jess looked at her watch.
“If he’s as concerned as you believe, Jess, he’ll be awake.” Tom kissed her forehead and smiled. 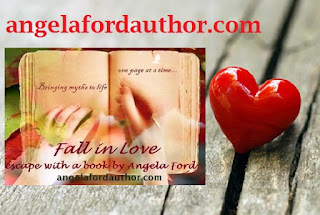